Welcome to Part 2 of my How to Use Poses tutorial series where I will explain how to use CAS Poses! CAS poses are actually the easiest of the posing methods, at least in my opinion, so I’m also going to tell you how to make the most of your CAS posing sessions. You may need to download a few extras here and there in addition to the stuff listed directly below this paragraph. The extras will optional but what is listed below is absolutely necessary.

You Will Need for This Tutorial:

Although I didn’t list it in the box above, you will need a way to take screenshots in CAS which requires an external program of some sort. Personally, I use the open-source freeware program called ShareX to take all of my screenshots but you can use whatever you are comfortable with as there are countless options out there. I suggest something with programmable hotkeys so you can quickly and easily take screenshots just by tapping a key or couple of keys on your keyboard. For instance, I have ShareX mapped to use the hotkeys Alt+Q to take screenshots of the active screen. I can quickly tap those keys and take rapid-fire screenshots as needed then edit them later.

Although poses for the Sims can be found in many places, not all of them are for CAS posing. You need to make sure they actually say “CAS” on them and what trait they are mapped to. You see, that’s how they work. Each pack of poses is mapped to a trait in CAS then when you select that trait the Sim will cycle through the pose pack mapped to that particular trait. Make sure you don’t download more than one pose pack for the same trait!! For the sake of simplicity, we will be using the same pose set as the first tutorial as it has a CAS version in it and that is HelgaTisha’s Model Poses 21.

For starters, get your Sim setup the way you want them to look with the clothes, hair, makeup, etc. in CAS. Think of CAS as your personal photo studio! Once your Sim is perfect, don’t forget to save them to the library just in case the game crashes or the power goes out as you just never know. It’s always a good idea to save your Sim routinely because you can always delete extra files later, but you can’t save what you’ve already lost. 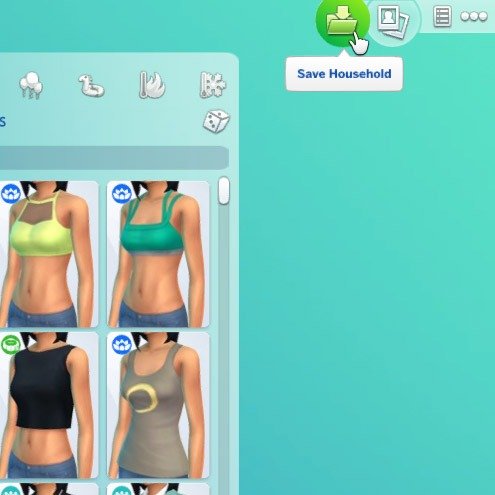 Technically, you can only have one CAS background at a time. If you want to change your background you can install one replacement at a time from any number of sites. There is one little workaround though! There is a special accessory by SonyaSims that will change the color of the CAS background on your whim! See here! You also need to get rid of that weird blob at your Sim’s feet. To do that, you need this blob remover: click here. Just put both the accessory CAS background and the blob remover in your Mods folder. I’ll show you later why there’s a benefit to having a solid (or almost solid) color CAS background. (Why yes, I did make a CAS background to match my website!)

When working in photography, you will quickly learn that lighting is everything. I love you, Maxis, but the default CAS lighting is atrocious. At least for the purposes of glamour shots it is! Luumia created a CAS Overhaul with new immersive lighting that I use in my game for all CAS screenshots. Here’s a link to the page with information about it: CAS Overhaul v2. If you are confused by the descriptions and don’t know what to download or where to fix the lights, just download this one and put it in your mods folder to enhance the CAS lighting. Oh, to get rid of all the menus around your Sim, click in the empty space a few times and the menus should disappear.

Ok, now we’re ready for some posing! As I explained earlier, CAS poses are mapped to a certain trait. To activate a pose pack, you click on the corresponding trait and then the Sim will cycle through the poses in that pack. Since we are using HelgaTisha’s Model Poses 21, it’s CAS version is mapped to the Hot-Headed Trait. Click on the Hot-Headed Trait and the Sim should start cycling through all the pack’s poses. It will only cycle through the poses once and it can be kind of fast so get those screenshot hotkeys ready! To make it cycle through again, just remove the trait from your Sim and click on it again.

Now that you’ve seen all the poses in this pack and how your Sim uses them, adjust the camera as needed. Zoom in, zoom out, swing it around, whatever you need to do to get that perfect angle. Then, click on the Hot-Headed Trait again and wait for the perfect pose to come up and then take that screenshot! Note: you can zoom in and out while the poses are cycling but if you click anywhere, the posing will stop, and your Sim will reset to normal.

That’s all there is to it. Now just take your screenshots into your image editor of choice and have fun. If you need help removing the background from your Sim, I may write a tutorial for that next for both Photoshop (which I know by heart) and maybe GIMP as well if I can.

Remember, that only poses that are specially made for CAS will work in CAS!

My next tutorial on posing will be for the more complex poses that are in-game with props. I hope you found this tutorial helpful and easy to follow. If you have any questions, corrections, etc., please feel free to contact me via email or talk to me on Discord.

This site uses Akismet to reduce spam. Learn how your comment data is processed.

All of my mods have been thoroughly tested and are working with this latest game version. For more information, please see this page: Patch Updates.

If you enjoy this website and want to keep it free for all always, please consider making a small donation to keep this site running.